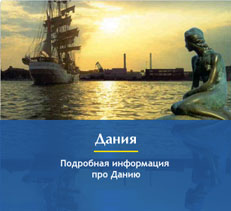 The information about the Faroe Islands is available here

Denmark is the smallest and most southern country in Scandinavia. It attracts tourists with its pretty towns, old castles and palaces, clean beaches and pristine beauty of the forests. The country is ideal for family holidays, because a lot of attention is paid to children here.

The capital of Denmark ‒ Copenhagen ‒ is the most popular city not only in Denmark but also in the whole of Scandinavia. According to the magazine Monocle, in 2013 it was named the best city to live in. Founded in 1167 on the two islands, Zealand and Amager, the city soon became a major trading port. Today Copenhagen is one of the largest cities in Scandinavia with a population of about 1.8 million people. This city will charm you by combination of the splendor of the royal palaces, interesting sights and entertainment possibilities of the modern city. Everybody will find something to do here: walk through the pedestrian streets of the city, go shopping, relax in the hundreds of cafes and restaurants, visit world-class museums, theaters, concert halls and art galleries.

Once in Copenhagen, one has to see the famous sculpture “Little Mermaid”, which is located on a rock on the wharf Langelinje. This monument appeared in Copenhagen more than 100 years ago and became not only the famous tourist attraction, but also a symbol of the city. Creation of the monument was commissioned by the son of the founder of the “Carlsberg” brewery, who was fascinated by a ballet The Little Mermaid at the Theatre Royal.

Amalienborg ‒ the residence of the Danish Queen and Prince Consort – is also located in Copenhagen. This is a beautiful architectural ensemble in the Rococo style. In the midst of the palace square stands a monument to Frederick V. In the Palace you can visit the museums and the chambers of Queen’s ancestors. Not far from the Palace Rosenborg Castle is situated, where you can get acquainted with the installation of royal interiors and Danish crown jewels. 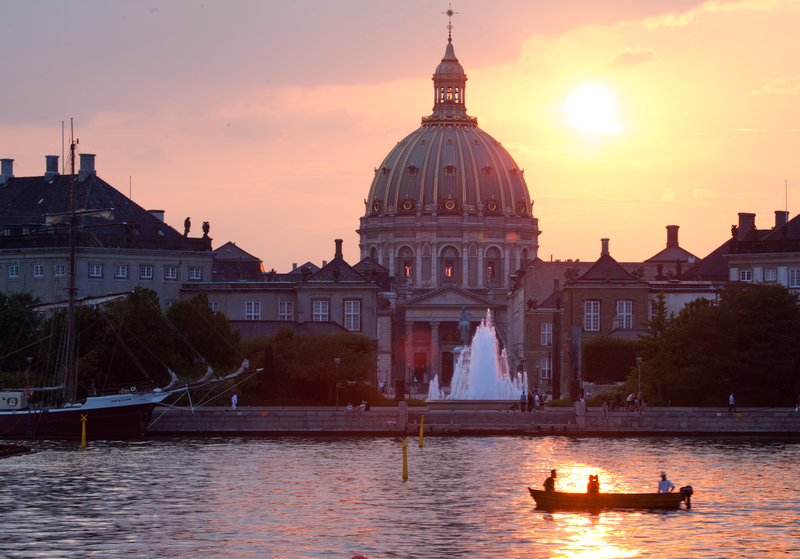 In Copenhagen and other regions of Denmark we can arrange for you guided tours in English. We would recommend the tour “Castles of North Zealand,” as the most popular. This tour allows you to visit three castles ‒ a majestic Kronborg, Fredensborg, where the most significant events and receptions of the Danish royal family are held, and luxurious Frederiksborg.

Copenhagen is the most charming city in Europe. Take a bicycle, the most popular and convenient form of transport here, and go for a tour. Bike paths and special bridges over the canals are connected to almost all areas of the city, and you will have convenient access to various attractions. Or take a boat trip on the canals of Copenhagen and admire the city from the water.

Visit Aarhus, the second largest and the oldest city in Denmark. Founded in the days of the Vikings, now it houses the collection of old buildings, which have been moved here from across the country. True old stables and other workshops are held here. Art Museum in Aarhus is also worth a look, the installation there represents the “Divine Comedy” by Dante.

Roskilde ‒ another city famous for its historical heritage is situated on Zealand Island, in 35 km from Copenhagen. Also built in the times of Vikings, it attracts many tourists by Viking Ship Museum, featuring an ancient ship yard and Heritage Village.

On top of all that, Copenhagen is a perfect place to go for the family trip with kinds. In the heart of Copenhagen, Tivoli Park is located. It’s one of the oldest amusement parks in the world. With its antique carousel and modern roller coasters, thematic performances and fireworks, this is an excellent park for a fun filled day with the whole family.

Legoland is another major attraction for children. It occupies the territory of 10 hectares on the island of Jutland. The entire park is made up from more than 45 million Lego bricks, here are models of the world’s most famous buildings, fairy tale characters, animals and birds. This fantastic place is the most visited place in Denmark after Copenhagen.

We would also recommend you to visit the birthplace of the famous fairytale writer Hans Christian Anderson. His tales are known and loved by both adults and children. He was born in the small town of Odense, the son of a poor shoemaker. Here you find two museums dedicated to him. In the memorial house of the writer rare editions of his books are kept, including a huge number of translations. Here you can see pictures of the author and learn about his life and work. Besides, there is an opportunity to swim along a channel to The Funen Village, the era of Hans Christian Anderson was recreated, with windmills and old farms.

When traveling in Denmark, keep in mind you are in the happiest country in the world (the GallupWorldPoll survey, 2010).